US Senator Barbara Boxer: Wellstone Assassination was "a Warning" 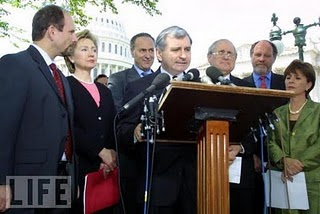 Scholar-activist Four Arrows, co-author of American Assassination: The Strange Death of Senator Paul Wellstone, today revealed for the first time a reported conversation in which U.S. Senator Barbara Boxer (D-CA) confirmed that the Wellstone plane crash was an assassination, not an accident.

As Four Arrows recounted on today's edition of The Kevin Barrett Show (beginning somewhere around the 20 minute mark): a trusted friend of his, during a conversation with Sen. Boxer, was surprised when the Senator asked "are you a friend of Four Arrows?" The friend said yes. Boxer said "tell him he doesn't know how right he is. (The Wellstone assassination) was meant as a warning to all of us." Sen. Boxer went on to say that if asked, she would deny the statement.

Sen. Boxer, who other sources report has confidentially admitted that she knows 9/11 was an inside job, has publicly confirmed that she does not trust the 9/11 Commission version of events, specifically the official narrative of the alleged 9/11 hijackers. The following exchange took place between Senator Boxer and myself on Wisconsin Public Radio's program "Conversations with Kathleen Dunn" on December 5th, 2005 (click here for archive -- note that the text below is a summary, not a transcript):

Barrett: Senator Boxer, I’d like to thank you and Senator Feingold for hanging in there after 9/11...(Boxer: “You’re welcome.”) Now as you may know, Congressman Kurt Weldon has been screaming from the rooftops that we need a new 9/11 Able Danger investigation focusing on what US intelligence agencies knew about Mohammad Atta and when they knew it. Newsweek and other mainstream publications have written that Mohammad Atta was trained at the Foreign Officer’s school Maxwell Air Force Base in Alabama. And Daniel Hopsicker’s book Welcome to Terrorland makes it clear that Hoffman Aviation in Venice Florida, where the so-called hijackers trained, was actually a CIA drug import facility—it was a flight school in name only. Now Lt. Colonel Anthony Shaffer has blown the whistle—he says he and his colleagues in military intelligence identified Atta as a terrorist in 2000, but they were gagged and ordered to “forget they had ever heard of Atta.” Are you among the 245 senators and representatives who have signed Congressman Weldon’s letter demanding a Congressional investigation into what US authorities knew about Atta prior to the 9/11 attacks?

Senator Boxer: That isn’t what the 9/11 Commission Report said—but that doesn’t mean it isn’t true. I haven’t seen Congressman Weldon’s letter yet, but...we need to pursue the truth about 9/11 wherever it leads. The truth should be the only priority. And we need the truth. My main focus now, though, is to end the war in Iraq.


According to Four Arrows, Sen. Boxer and other high-visibility people know that if they cross certain lines, they and/or their families will be assassinated. He offered this as a possible explanation of the reluctance of various well-known people, including Noam Chomsky, to speak the truth about 9/11.

Near the end of the show, Four Arrows suggested a "white armband" campaign for the 10th anniversary of 9/11, proposing that on that day, all those who do not believe the official version of events should wear a white handkerchief tied around their arm.

Listen to my interview with Four Arrows by visiting the Kevin Barrett Show archives and clicking on the link for the Tuesday, May 4th show. (You'll have to mute the live stream first.) More information on the show, including links to Four Arrows' work, here.