Former CIA Asset, Susan Lindauer, provides an extraordinary first-hand account from behind the intelligence curtain that shatters the government's lies about 9/11 and Iraq.
It casts a harsh spotlight on the workings of the PATRIOT ACT as the ideal weapon to bludgeon whistle blowers and dissidents.

A terrifying true story of "black budget" betrayals and the Patriot Act, with its arsenal of secret evidence, indefinite detention and threats of forcible drugging,

"EXTREME PREJUDICE" is a book by Susan Lindauer that reveals one Asset's desperate struggle to survive the brutal cover ups of 9/11 and Iraq.

Her book delivers a high tension expose of the real facts surrounding the CIA's advance warnings of 9/11 and Iraq's contributions to the 9/11 investigation. 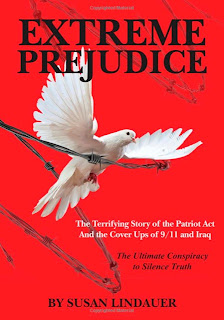 I recommend that you watch the entire video - but if you want to cut to the chase, "The hijackings and a controlled demolition scenario" starts at 11:02 minutes.
No comments:

This info was uploaded to youTube by "AlienScientist." He writes:
"Ten years ago I was a freshman in college sitting in a physics classroom. I watched the 9/11 attacks on TV with my professors and classmates. When we first saw the towers go down, our initial conclusion was that they had been blown up. I left campus that day with a friend and drove out to the country expecting a scene like the movie "Red Dawn" to unfold. When nothing happened I went back to my normal way of student life and never thought about or questioned what I saw on TV that day until 4 years later when I watched a documentary about the attacks which piques my interest.

I began my research as a skeptic with scientific training and background, but soon began to uncover overwhelming evidence of a larger conspiracy. I decided to devote all my time towards uncovering and exposing the truth in order to bring justice to the thousands who lost their lives that tragic day."

"This video is a compilation of all the best evidence I have found in the past 6 years of research I have done into 9/11. My aim is to encourage viewers to support the victim's families plea for a new investigation of 9/11 and give them the specific areas and people who I feel should be investigated most."
John O'Neil (Able Danger) flight training:
1. Four hijackers' ID'd as al-Qaeda before 9/11, officer says http://www.usatoday.com/news/washington/2005-08-17-911-hijackers-identified_x.htm

9/11 - Sen. Bob Graham (D-FL) and Rep. Porter Goss (R-FL) -- the chairmen of the Senate and House Intelligence Committees -- along with Sen. John Kyl (R-AZ) and some other members of the House Intelligence Committee are in a meeting at the Capital building with the director of Pakistani intelligence (ISI), Lt. Gen. Mahmud Ahmad, who authorized a $100,000 wire transfer to alleged lead 9/11 hijacker, Mohamed Atta.
http://www.salon.com/politics/feature/2001/09/14/human_spies/index.html
No comments:

"Gonzo" Journalist Hunter S. Thompson Thought 9/11 was an Inside Job

After the September 11 attacks, Hunter S. Thompson voiced skepticism regarding the official story on who was responsible for the attacks.

He speculated to several interviewers that it may have been conducted by the U.S. Government or with the government's assistance, though readily admitted he had no way to prove his theory.

In 2002, Thompson told a radio show host:
"You sort of wonder when something like that happens, well, who stands to benefit? Who had the opportunity and the motive? You just kind of look at these basic things [...] I saw that the US government was going to benefit, and the White House people, the Republican administration to take the mind of the public off the crashing economy. [...]
And I have spent enough time on the inside of, well in the White House and you know, campaigns and I've known enough people who do these things, think this way, to know that the public version of the news or whatever event, is never really what happened."

In 2004, Thompson, regarding politics, wrote: "Nixon was a professional politician, and I despised everything he stood for—but if he were running for president this year against the evil Bush–Cheney gang, I would happily vote for him."

From Wikipedia
No comments:

Email ThisBlogThis!Share to TwitterShare to FacebookShare to Pinterest
Labels: Hunter S. Thompson
Newer Posts Older Posts Home
Subscribe to: Posts (Atom)
Most
propaganda is not designed to fool the critical thinker - but only to give moral cowards an excuse not to think at all.
~ Ken Jenkins
When you believe lies ~ you give your power away.