Just in case you didn't know that the US government and al-Qaeda are on the same page.... it is indeed a tangled web that is being woven:
The terror group al Qaeda has found itself curiously in agreement with the “Great Satan” — which it calls the U.S. — in issuing a stern message to Iranian President Mahmoud Ahmadinejad: stop spreading 9/11 conspiracy theories. 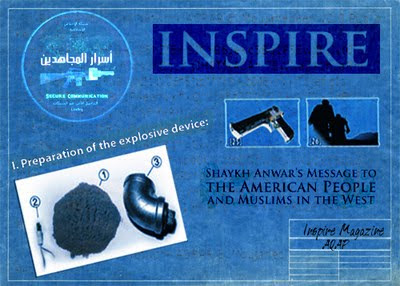 In the latest issue of the al Qaeda English-language magazine “Inspire” (pix above), an author appears to take offense to the “ridiculous” theory repeatedly spread by Ahmadinejad that the 9/11 terror attacks were actually carried out by the U.S. government in order to provide a pretext to invade the Middle East.

“The Iranian government has professed on the tongue of its president Ahmadinejad that it does not believe that al Qaeda was behind 9/11 but rather, the U.S. government,” an article reads. “So we may ask the question: why would Iran ascribe to such a ridiculous belief that stands in the face of all logic and evidence?”

Though Iran was the first of the two to use the “Great Satan” as a synonym for the U.S., the author claims that Iran sees itself as a rival for al Qaeda when it comes to anti-Americanism and was jealous of the 9/11 attacks.

“For them, al Qaeda was a competitor for the hearts and minds of the disenfranchised Muslims around the world,” the article says. “Al Qaeda… succeeded in what Iran couldn’t. Therefore it was necessary for the Iranians to discredit 9/11 and what better way to do so? Conspiracy theories.”

Iran continues to spread the conspiracy theory, al Qaeda says, because doing otherwise would expose their “lip-service jihad” against the U.S.

The magazine also includes a short article allegedly written by al Qaeda founder Osama bin Laden before his death at the hands of U.S. Navy SEALs in early May in which bin Laden advises his fighters not to let American soldiers “become great in your eyes.”
Apparently looking to bolster their ranks of the “Inspire” news desk, al Qaeda included at the end of the magazine a solicitation for contributors to the magazine “with any skills – be it writing, research, editing, or advice.” 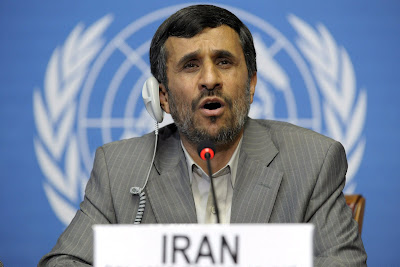 Ahmadinejad has repeatedly claimed that the U.S. was behind the 9/11 terror attacks, recently during the somber observance of the tenth anniversary of those attacks and then again in his speech to the U.N. General Assembly last week. That speech triggered a walk-out by the U.S. and several other delegations.
Source.
No comments: Links to this post

Email ThisBlogThis!Share to TwitterShare to FacebookShare to Pinterest
Labels: Al Qaeda agrees with US Govt, Iran, Mahmoud Ahmadinejad on 9/11

BEWARE: This WTC#7 video is a FAKE


A new FAKE short Building 7 video showing very clear explosions appeared on the Web recently and is going viral, so we have decided to warn you about it.
We think this video was released with the clear intention to hurt the 9/11 truth movement’s credibility and this is why we are publishing this article.
Please do not spread the video around. When you believe lies ~ you give your power away ~ and our power is telling the truth.

Someone uploaded a supposedly new video of WTC7 taken with home video that has flashes and sounds of explosions. The video is clearly and provably fake.

1. It is reversed frame-by-frame. It could not be the other side of the building because that side was shrouded in smoke. Also (as others have noted) the other side doesn't look like this). I have here decomposed the video into jpg images, batch reversed them, and recomposed them into a video. How would home video footage become flipped in the first place? There may be some software that does this, but I don't know what it is. Why would any legitimate video be processed this way?

2. The pattern of window breakage does not match other videos. One pattern of broken windows under the east penthouse is clearly duplicated a few floors lower like a crude Photoshop copy. This is not seen in other videos.

5. And so forth. Someone put way too much effort into faking this video in comparison with how crude it is.
Review:
Important points showing us this is a 100% fake:
Video too short
No source to corroborate it
Blurry / Fuzzy / Jerky / Digitally zoomed
The poster took another Building 7 footage, edited and mirror-inverted it. (side-by-side comparison with original footage)
The audio explosion seems to be dubbed in, and the overall audio is of very poor quality.
Last but not least, the poster of the video even took time to add a “flying saucer” which can be seen at 0:15 and 0:30 in the video (on top of the building). This is subtle and most people won’t see it while watching the video only a few times. But it’s there.
No comments: Links to this post

From original BBC News Article that appeared on September 23, 2001: 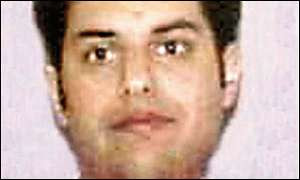 A man called Waleed Al Shehri says he left the US a year ago
Another of the men named by the FBI as a hijacker in the suicide attacks on Washington and New York has turned up alive and well.
The identities of four of the 19 suspects accused of having carried out the attacks are now in doubt.
Saudi Arabian pilot Waleed Al Shehri was one of five men that the FBI said had deliberately crashed American Airlines flight 11 into the World Trade Centre on 11 September.
His photograph was released, and has since appeared in newspapers and on television around the world.
Now he is protesting his innocence from Casablanca, Morocco.
He told journalists there that he had nothing to do with the attacks on New York and Washington, and had been in Morocco when they happened. He has contacted both the Saudi and American authorities, according to Saudi press reports.
He acknowledges that he attended flight training school at Daytona Beach in the United States, and is indeed the same Waleed Al Shehri to whom the FBI has been referring.
But, he says, he left the United States in September last year, became a pilot with Saudi Arabian airlines and is currently on a further training course in Morocco.
Mistaken identity
Abdulaziz Al Omari, another of the Flight 11 hijack suspects, has also been quoted in Arab news reports. 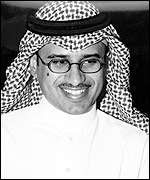 Abdelaziz Al Omari 'lost his passport in Denver
He says he is an engineer with Saudi Telecoms, and that he lost his passport while studying in Denver.
Another man with exactly the same name surfaced on the pages of the English-language Arab News.
The second Abdulaziz Al Omari is a pilot for Saudi Arabian Airlines, the report says.
Meanwhile, Asharq Al Awsat newspaper, a London-based Arabic daily, says it has interviewed Saeed Alghamdi. 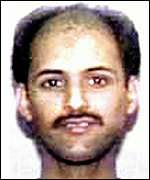 Khalid Al-Midhar may also be alive
He was listed by the FBI as a hijacker in the United flight that crashed in Pennsylvania.
And there are suggestions that another suspect, Khalid Al Midhar, may also be alive.
FBI Director Robert Mueller acknowledged on Thursday that the identity of several of the suicide hijackers is in doubt.
http://news.bbc.co.uk/2/hi/middle_east/1559151.stm
No comments: Links to this post

Email ThisBlogThis!Share to TwitterShare to FacebookShare to Pinterest
Labels: WTC 7 and Man Inside Yelling for Help

This footage was taken on 9/11, shortly after south tower collapsed.

Some very rare and interesting footage of journalist Mark Laganga who enters the lobby of World Trade Centre 7 at approximately 10AM-12PM on September 11th, 2001.

He begins by walking around just outside the crippled building, then sprinting inside after another man, to be confronted at the top stairs by a secret service police officer who is the "last one[s] in the building".

The collapse of WTC 7 is not shown in this clip. This video has subtitles for better understanding of what is being said (some is very difficult to hear).

Follow the link for a rare brochure from 1984 of the Trade Center. The title reads "The closest some of us will ever get to heaven."

A picture of what the lobby looked like inside South Tower in 1984.

The North and South tower from street level. Taken in 1984.

General Stubblebine was the head of US Intelligence gathering when he retired and is the highest ranking person to investigate on 9/11.

Here is what he has to say:

"The Pentagon was NOT hit by a plane" and
"The WTC buildings were blown up - they didn't fall down."
See why:

Email ThisBlogThis!Share to TwitterShare to FacebookShare to Pinterest
Labels: General Stubblebine III, Major General Stubblebine III, Pentagon, Stubblebine
Newer Posts Older Posts Home
Subscribe to: Posts (Atom)
Most
propaganda is not designed to fool the critical thinker - but only to give moral cowards an excuse not to think at all.
~ Ken Jenkins
When you believe lies ~ you give your power away.