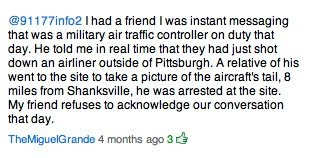 Email ThisBlogThis!Share to TwitterShare to FacebookShare to Pinterest
Labels: Flight 93 Shot Down, Reasons to Reinvestigate 9/11, Shanksville

Attack The Messenger: Richard Falk's Response to Harsh Criticism of 9/11 Blog Comments by the UN Secretary General and the U.S. Ambassador to the UN 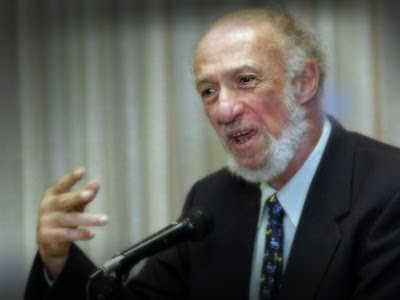 This is his "Response to Harsh Criticism of 9/11 Blog Comments by the UN Secretary General and the U.S. Ambassador to the UN" from his blog here.

Because my blog prompted by the Arizona shootings has attracted many comments pro and con, and more recently has been the object of a more selective public attack on me personally, I thought it appropriate to post a supplementary blog with the purpose of clarifying my actual position and re-focusing attention on the plight and suffering of the Palestinian people being held in captivity. In the background, are crucial issues of free speech, fairness in public discourse, and responsible media treatment of sensitive and controversial affairs of state.

Both the UN Secretary General and the U.S. Ambassador to the United Nations harshly criticized some remarks in my personal blog that mentioned the 9/11 attacks. They referred to the views expressed there as ‘despicable and deeply offensive,’ ‘noxious, ‘inflammatory,’ and ‘preposterous.’

Their comments were apparently made in response to a letter written to the UN Secretary General by the head of UN Monitor, a Geneva-based highly partisan NGO, that called misleading attention to this passage in the blog. Ambassador Rice called for my dismissal from my unpaid post as an independent Special Rapporteur of the UN Human Rights Council with a mandate to report upon the Israeli observance of “human rights in Palestinian territories occupied since 1967.”

For anyone who read the blog post in its entirely it should be plain that the reference to the 9/11 issues is both restrained and tangential. What is stressed in the blog is the importance of carefully examining evidence before drawing conclusions about political and legal responsibility for highly sensitive public acts, and the importance for the serenity of the society of achieving closure in a responsible manner.

I never endorsed doubts about the official version of 9/11 beyond indicating what anyone who has objectively examined the controversy knows– that there remain certain gaps in the official explanation that give rise to an array of conspiratorial explanations, and that the 9/11 Commission unfortunately did not put these concerns to rest.

My plea was intended to encourage addressing these gaps in a credible manner, nothing more, nothing less. I certainly meant no disrespect toward the collective memory of 9/11 in the country and elsewhere. On the contrary, my intention was to encourage an investigation that might finally achieve closure with respect to doubts that remain prevalent among important sectors of the public, including among some 9/11 families.

What seems apparent from this incident, which is itself disturbing, is that any acknowledgment of doubt about the validity of the official version of the 9/11 events, while enjoying the legal protection of free speech, is denied the political and moral protection that are essential if an atmosphere of free speech worthy of a democracy is to be maintained.

When high officials can brand someone who raises some doubts in the most cautious language as ‘an enemy of the people,’ then there are either things to hide or a defensive fury that is out of all proportion to the provocation. To seek further inquiry into the unanswered questions about 9/11 is surely not an unreasonable position

What is dismaying to me is that neither the office of the Secretary General nor the U.S. Mission to the United Nation made any effort to contact me to seek clarification of my remarks on these issues that are not connected with my UN role prior to making their insulting criticisms damaging to my reputation.

I would think that as a representative of the UN and a citizen of the United States, I am at least entitled to this minimal courtesy, and more substantially, that whatever criticisms are made are based on what I said rather than on a manifestly inflammatory letter written by the UN Monitor, that has made a habit of publicly attacking me in consistently irresponsible and untruthful ways, presumably with the intention of diverting attention from my criticisms of Israel’s occupation policies in the Palestinian territories.

It is always more tempting to shoot the messenger than heed the message. A similar tactic, what I call ‘the politics of deflection’ was deployed over a year ago in a shabby attempt to discredit the distinguished South African jurist, Richard Goldstone, a person of impeccable credentials as an international public servant.

The intention was again to avoid a proper focus upon the devastating findings and recommendations of the Goldstone Report submitted to the United Nations after conducing a scrupulous inquiry into the allegations of violation of law associated with the Israeli attacks on Gaza between December 27, 2008 and January 18, 2009.

I remain determined to report as fully and honestly as possible about the massive human rights violations confronting Palestinians who have now lived without rights under occupation for more than 43 years, and to do my best not to let such personal attacks impair my capacity to carry out the assignment that I was invited to perform by the UN.

What the United States Government, the Secretary-General and the media should be focused on is the ongoing, widespread and systematic violation of Palestinians’ human rights by Israel. Only since the beginning of 2011, at least four Palestinian civilians have been killed by Israeli forces and more than 33 others have been injured.

This is in addition to the expansion of settlements, home demolitions, forced evictions and displacement of Palestinian families, revocation of residency permits and forced transfers, particularly devastating in East Jerusalem, detention and mistreatment of over 6000 Palestinians, including children, as well as the illegal blockade of Gaza.

My forthcoming report to the Human Rights Council addresses these and other severe ongoing violations of Palestinian rights by Israel.
No comments: Links to this post

Daniel Ellsberg is passionate about the need for a new 9/11 investigation. Ellsberg’s views are a challenge to Veterans For Peace, an organization for which he advocates support.

Unfortunately Veterans For Peace members appear mysteriously timid about using the need for a new 9/11 investigation as a powerful challenge to the pretext of the war that led to the war itself.

Part 2: Charles, the Queen of New England, Meets Albert for a 911 Truth Chat About Seismic Activity

Eager to spread the truth of 911, Albert arranges to meet Charles, the Queen of New England in the park to discuss the truth about 911 and answer her tough and endless questions.

Charles also reveals how he/she keeps his/her hair looking perfect after a ride on a motorcycle.

Part 1: Charles, the Queen of New England, Meets Albert for a 9/11 Truth Chat in the Park


Eager to spread the truth of 9/11, Albert arranges to meet Charles, the Queen of New England in the park to discuss the truth about 9/11 and answer her tough and endless questions.

The Queen of New England Drags the 911 Truth from Albert


In his quest to spread the truth of 9/11, Albert enlightens the Drag Queen of New England about the demolition of World Trade Center Building Number 7 on September 11th.

In addition to being an interesting documentary about the amazing 1974 stunt of wirewalker Philippe Petit, there is footage of the twin towers being built and many views inside them.

This film gives the viewer a good sense of the massive size of these towers and helps one understand that the "official story" of steel melting all of that is patently silly.

Philippe Petit captured the world's attention in 1974 when he successfully walked across a high wire between New York's Twin Towers.

This Oscar winner for Best Documentary explores the preparations that went into the stunt as well as the event and its aftermath.

Obsessed with the towers even before they were fully constructed, Petit sneaked into the buildings several times to determine the equipment he needed to accomplish his daring feat.
No comments: Links to this post

Email ThisBlogThis!Share to TwitterShare to FacebookShare to Pinterest
Labels: Controlled Demolition, Demolition Access to WTC Video, Kevin Ryan
Newer Posts Older Posts Home
Subscribe to: Posts (Atom)
Most
propaganda is not designed to fool the critical thinker - but only to give moral cowards an excuse not to think at all.
~ Ken Jenkins
When you believe lies ~ you give your power away.