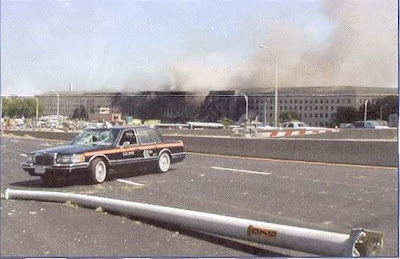 If there is an Achilles heel to the official 9/11 cover story, it has to be Lloyde England.
The Washington D.C. taxi driver is an essential part of the official story that American Airlines Flight 77 hit the Pentagon at 9:38 a.m. on Sept. 11, 2001. His car is supposed to have been hit by one of the light poles knocked over by the plane right before it hit the Pentagon. This story was supposed to offer rock solid confirmation of the Pentagon government account. Instead, it’s the weakest link.
Not only is England’s version of what happened to him that day not supported by the witnesses or the physical evidence (as we shall see), but in an unguarded moment in the film National Security Alert (by Citizen Investigation Team), England came very close to admitting he had been a part of the conspiracy.
England told CIT (he didn’t realize the camera was running, but he clearly understood he was talking “on the record.”) that there was a lot more to the 9/11 events than meets the eye:
“When people do things and get away with it, eventually it’s going to come to me. And when it comes to me, it’s going to be so big. So it had to be stopped in the beginning when it’s small, you see, to keep it from spreading.
“This is too big for me man. This is a big thing. Man you know this is a world thing happening. I’m just a small man. My lifestyle is completely different from this. I’m not supposed to be involved in this. This is for other people. People who have money and all this kind of stuff. Well, I not supposed to be involved with this, I don’t have nothing.
“People with money – this is their thing. This is for them.”
People with money? Does that sound like he’s describing Al-Qaeda? If this was a case of a hijacking that briefly touched on him (as the result of his cab being hit), he wouldn’t have said, “…it had to be stopped in the beginning when it’s small, you see, to keep it from spreading.”
Is he talking about covering up the truth at the beginning before too many questions are asked? He certainly doesn’t sound like someone who happened to be in the wrong place at the wrong time when a fundamentalist Muslim plot to attack America unfolded in front of him.
He goes on to say that what we’re led to believe happened by historical accounts isn’t necessarily true.
“History is ‘his story.’ It’s not the truth. It has nothing to do with the truth.”

England's own drawing of the pole through the windshield of his cab.
England says he stopped his car after it was impaled by the pole. The pole was supposedly wedged all the way in his back seat and protruding from the front of the car. He says he flagged down a man in a van who pulled over and helped him pull the pole out of the windshield.
To date, not one witness claims to have seen the pole hit the cab or anyone pulling it out of the car. And the physical evidence just doesn’t support his story.
England was interviewed in National Security Alert, a remarkable bit of investigative journalism by Craig Ranke and Aldo Marquis of CIT. The film features interviews with a number of witnesses who contradict the official flight path of Flight 77. And that flight path is critical to the official story because of the downed light poles.
What makes these witnesses particularly important (in addition to the fact that two of them are Pentagon cops) is where they were positioned when they say they saw the plane. All the witnesses in the film were situated to the west of the Pentagon – in the vicinity of the Citgo gas station or the Navy Annex building – and were in a position to see whether the plane passed to the north or to the south of both. Both cops were at the station when the plane passed them; a third witness worked at the station.
The cops and all the rest of the witnesses that CIT interviewed confirmed the plane had passed to the north of the station and to the north of, or directly over, the Navy Annex. Not only does this contradict the official version (which had the approach on the south side) but it also means that the light poles that were allegedly hit by the plane (there were five) could not have been.
The pole evidence had to have been staged.
That brings us back to Lloyde England. If the pole evidence is fake, then he must have been part of the deception. And if he’s shown to have lied, then the official story crumbles.
By the time of the National Security Alert interview, England already knew of the witnesses who contradict the flight path “evidence.” He seemed to try to overcome this by insisting that he had been right beside the Pentagon instead of to the south where the poles were downed. Despite dozens of attempts by Ranke to show him photographic proof of where his car was, he continued to insist he was somewhere else. If he were being honest would he not have shown even a shred of doubt in the face of clear proof?
Photographs, including the one at the top of this article, show that the windshield of the cab is smashed. They also show that there was no damage to the hood of the car. Was the pole lying on the hood, England was asked? “Ya, ya. But there’s no scratches on the hood.”
The piece of the pole we see lying on the ground is more than 20 feet long. And England confirms that it was the curved and thinner end that was in his back seat. The majority of the length of the pole protruded well beyond the front of the car (the heavy end). Somehow, the pole stayed impaled in the car without damaging the hood. Interior damage to the car also was not consistent with a huge pole becoming embedded in the back seat (no more than a tiny rip in the upholstery).
After the plane had just smashed into the Pentagon to his left and a light pole had come smashing through his windshield, England made an odd decision. He decided he needed to remove the pole immediately.
England flagged down a man driving a van. He claims he lifted the pole out of the car with the help of the stranger, who then drove off without a word. Apart from how unlikely this all sounds, the idea that this long, heavy pole would stick out of the front of the car without crashing down on the hood is simply unbelievable. England even agrees with this, pointing out the lack of hood damage even before interviewers could point it out.
He also makes a point that there didn’t seem to be enough of a hole in the Pentagon to accommodate a 757. Did he say this to muddy the waters, to make himself sound more like he had no hidden agenda?
England’s wife, Shirley Hughes England, adds to the mystery. She was working for the FBI in 2001, and in an interview with CIT, she states that she knows why the FBI didn’t take the cab in for a forensic examination, but she won’t say more. Later in the film, she says the car was taken in “for a day or two.”
Ranke recounts how he told Hughes how the plane didn’t hit the Pentagon but continued on. She said, “ya.” He said, “What?” She said, “Ya, what you said. I’m not going to say anymore.”
There is obviously a great deal more to the England story than just having a pole hit his cab. He seems uncomfortable with his role in the whole thing. If the government had any real interest in finding the truth, then an attempt would be made to either verify or disprove England’s account.
We’ll just have to add this to the list of critical areas that have been ignored by any and all investigations into 9/11. 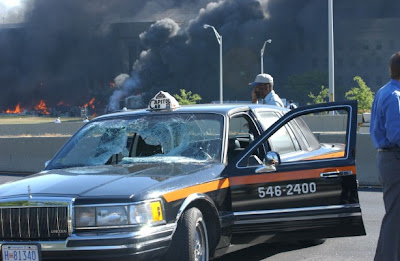