PETERBOROUGH — Their petition article failed at the polls Tuesday, but the eight Peterborough members of the Monadnock 9/11 Truth Alliance say they are not backing down.

“We are delighted that about a third of the people think this was something worth looking into,” Karin Wells said. “We will continue to educate and tell people. ... It’s swimming upstream. It’s so hard.”

The petition article on Tuesday’s Town Meeting ballot asked voters to send a message to the government by asking the town to instruct the state Congressional Delegation to pursue a new and independent investigation to address thoroughly all of the evidence and unanswered questions related to the events of Sept. 11 2001.

“It’s simply to make noise and make people aware of it,” Wells said. 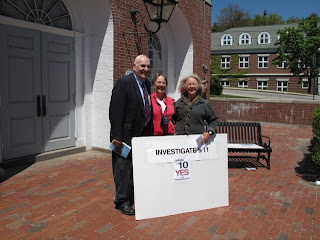 Left to right: Former Republican Governor Walter Peterson, Carol Wyndham and Kathleen Iselin try to educate voters to the importance of calling for a New Investigation into 9/11.
The eight Peterborough members — Karin and Peter Wells, Mike Casner, Jack Meagher, John and Carol Wyndham, and Jay and Kathleen Iselin — make up almost half of the 20-member Keene-based group, Monadnock 9/11 Truth Alliance.

“We’re pleased that Gov. [Walter] Peterson is among our ranks. We think that it’s an indicator of how more and more politicians are realizing the weight of this issue,” Jay Iselin said.

Peterson, who signed the petition, told the Monadnock Ledger-Transcript yesterday that he did not expect the petition article to pass, but that asking questions when you have doubts is always the right thing to do. 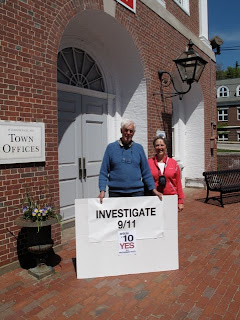 Left to right: John Wyndham PhD (Physics) and Carol Wyndham. Not shown - but who were there - are Architect Peter Wells, Engineer Jack Meagher, Jay Iselin, Karin Wells and Mike Casner.
“You should question some things if they don’t make sense,” he said. “I don’t think it’s unpatriotic.”

Peterson said both he and his wife, Dorothy, decided to support the petition article after watching one of the videos of the collapse of the Twin Towers, which he said looks like a controlled demolition to them. “That raised questions because that’s not how a building would fall if it was attacked,” Peterson said. “Both Dorothy and I had viewed the video and there were certainly a lot of serious questions raised about what happened there.”

“Most people don’t want to bother. But I think if you raise a question, if you really have a doubt, you should say it,” Peterson said.

The members of the truth alliance spent Tuesday outside of the Town House asking voters to say yes to their petition and said they did change some minds, but they were also met with hostility from some voters who opposed the petition. “We’re presenting facts and they’re presenting attacks on our character,” Kathleen Iselin said.

Members said that despite their defeat they plan to continue their search for the truth and to educate the public on the issue. A movie series in Depot Square will continue, starting May 22, every Saturday from 9:11 a.m. to 9:11 p.m. The public is welcome to come, watch a movie about the 911, ask questions of group members and pick up literature.

"But I think if you raise a question, if you really have a doubt, you should say it."
- Walter Peterson, Peterborough

Email ThisBlogThis!Share to TwitterShare to FacebookShare to Pinterest
Labels: *ACTION - What You Can Do, Newspaper Article

"There may be times when we are powerless to prevent injustice, but there must never be a time when we fail to protest." (Elie Wiesel) CONTACT NH TRUTH at: SeeNewEvidence (at) gmail (dot) com
"Hi, mom, this is Mark Bingham... you believe me, don't you, mom?" Mark Bingham - Sept. 11, 2001